skip to main | skip to sidebar

Making Sense Of the Bike Shop

I have heard from more than one person, they are intimidated by the thought of buying a bicycle. And, I cannot say that I blame them. There seems to be so many choices and the price ranges vary so much that it could be a difficult thing to deal with coming right off the street. The point of this blog post is to help try to make it easier to walk in and feel a little more at ease.

I think the best way to start is to just describe the different styles of bicycles. I would define as bicycle as any two-wheeled, human powered vehicle. But, there are road bikes, mountain bikes, hybrids, cruisers, and many other styles. I am going to go over the most common types of bike out there and break it into categories.

I am going to start first with the road style bicycles. I would define a road bike as any bicycle that is meant to be traveled pretty much exclusively on the pavement. When I was g 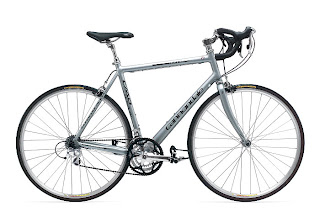 rowing up, they were often called 10-speeds. Road bikes tend to have narrow tires, "drop"-style handlebars (they curve out and around) and are built for speed. Most modern road bikes are made out of aluminum for a entry-level model and carbon fiber for expensive models. Here is an example of a typical road bike:


There are two other road-style bikes I will mention that at first glance appear to be road bikes, but really are a bit different. The first is a "touring" bike. A touring bike will often have drop style bars (though not always) and the larger wheels, but the tires may not be as narrow and the frame geometry is more "relaxed." In other words, it sits a little more upright. Also, they have more clearance in the wheel base to make it easier to add fenders and also built in hardware so it is easier to add a rack. Touring bikes are meant to go for the long haul, but they also make good commuters. Touring bikes are often made of steel as it tends to hold up a lot bet 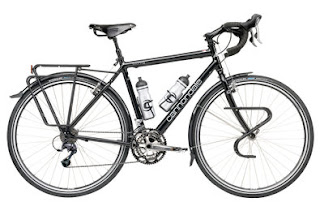 ter than aluminum and carbon fiber. Here is an example of a touring bike: 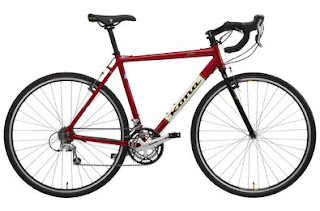 n bottle holders and such. They tend to be a little lighter weight than a touring bike, but they were made with racing in mind. They can also take wider tires due to more clearance--more so than a touring bike often. Here is a random photo of a cyclocross bike:


The next "type" I will cover is a hybrid bicycle. A hybrid is just that: a hybrid between a road bike and a mountain bike. Kind of like a cyclocross except hybrids generally have flat bars instead of drop bars like a mountain bike. Hybrids tend to run the bigger road style tires, but have wider rims and tires. Hybrids tend to be beefier frame wise and also have hardware slots for water bottle holders and racks. Some also call these comfort bikes. But, the difference is comfort bikes are made more for a bike path than the street. Some hybrids have shocks built into the frame and forks which people either love or hate. Shocks make your ride more smooth, but they also make your ride slower and if you are commuting, that means you need to get up earlier. Still, a hybrid makes a good choice for someone that has been out of cycling for a while, but wants something that can be taken about anywhere. Hybrids can be taken off road, but doing a lot of serious mountain biking on bumpy terrain would not be a great idea. Here is an example of a hybrid I just picked up a couple of weeks ago: Not thee bike, but the same model: 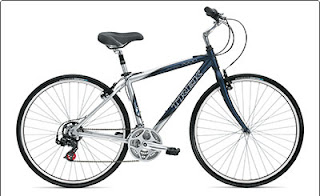 And, the Mountain bike. Mountain bikes are, well, made for the mountains. They are bikes built for off-road use. They tend to have smaller and wider wheels with knobby tires to take the abuse of riding on the rocky terrain. Mountain bike generally have flat style handlebars and the shifters tend to be at thumb-level and make it easy to shift. Mountain bikes in some places have gotten a bad rap lately. They are heavy, the smaller wheels make you go slower, and they are ugly with all that suspension are things I hear. And, some of them may be true, but that fact is they can make very good bikes for commuting as well. If you are going to commute and have no intention of riding it off road, ditch the knobbies and get some narrower slicks. Trust me, this will make your ride so much better. And, keep the knobbies around as you can put them back on if you decided to hit the mud. I personally put probably close to 3,ooo miles of city commuting on my trusty old 1990 Trek Antelope. It unfortunately sits in the basement since I went with a touring bike, but still have no intention of getting rid of it as I could not sell it for what it is worth to me and I also need a trusty backup. Here is a picture of a typical modern mountain bike: 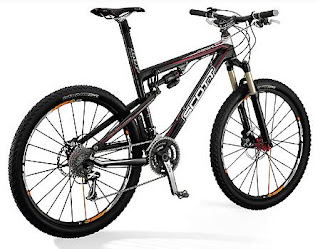 So, there are the some of the most popular styles. Another style that has really gained in popularity the past few years are fixed-gear bicycles. Sometimes they are referred to as track bicycles. The thing about a FGB, is that they do not coast. In other words, when going down a hill, the pedals will keep spinning. Or, if walking the bike, the pedals are also going to spin. If you pedal backwards, the bike will go backwards. Another thing gaining in popularity is a single speed. Some back wheels even have both a fixed and a free hub, so one can turn the wheel around and chose. One of the major advantages of these bikes is the maintenance is minimal. No shifters to adjust all the time and a FGB also requires stopping by using your legs more than a handbrake. A track bike is also a fixed gear, but was build for a cycle track in mind, or a velodrome. Think a running track, but for bicycles.

There are other styles, but these are some of the most common ones out there. When shopping, I recommend a locally-owned bicycle shop as they are often staffed with people that are knowledable about bikes. I really do not recommend box-store bikes. The average life of a box or department store bike from store to landfill is 75 miles. And, they are built accordingly. But, if you really are not going to ride that much or if you are buying something for your kid that he is going to outgrow in two years, it may not be a bad choice.

Hope that helps. Ride safe!
Posted by Bryce at 8:29 PM